Gallbladder Stones (Gallstones) are stones or lumps that develop in the gallbladder or bile duct when certain substances harden. If they block the bile duct, they can be extremely painful.

“Cholelithiasis” is defined as the presence of stones in the gallbladder.  The majority of gallstones are composed of cholesterol (96%) in the form of layers, calcium salts  (3%), and bilirubin (1%).  Gallstones are thought to be caused by an imbalance in the chemical make-up of bile inside the gallbladder. Bile is a liquid produced by the liver to aid digestion.

Experts are not completely sure why some people develop the chemical imbalance in their gallbladder that causes gallstones.  It is still unclear exactly what leads to this imbalance. 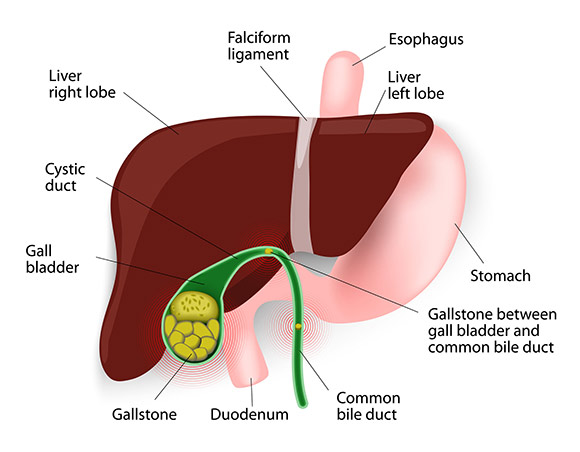 Gallstones can form if:

Sometimes only one stone will form, but there are often several at the same time. Gallstone disease is primarily a metabolic disease.

Its pathogenesis mainly develops as follows:

We do know that gallstones are more common among overweight/obese people, especially women.  Obese children have a considerably higher risk of developing gallstones, compared with kids of healthy weight.

Others at risk include:

(80%) of gallstones do not cause symptoms . If symptoms occur, the most common symptom is pain in the upper right quadrant of the abdomen, which worsens after meals. Other symptoms include gas, indigestion (bloating), nausea and vomiting. In severe cases, there may be fever.

The most common complications are:

The diet in bile processes should serve to avoid symptoms of liver colic and biliary dyspepsia, but does not prevent the formation of new stones. The same bile diet does not work for all patients, but in general terms it is convenient to:

Any type of cocoa is not tolerated by any patient.

When you have been free of symptoms for a few weeks, you can have a food or use a cooking method you were used to before the problem and that you miss. It may be tolerated, but it must be done gradually and cautiously.

If there are still gallbladder stones, removal of the gallbladder is usually decided. You must then follow a diet with the following characteristics, starting after surgery:

If tolerance has been good, continue with an easily digestible diet in moderate amounts. Continue the biliary diet for 6-9 months.

Cholecystectomy (not simple) refers to when, in addition to removing the gallbladder, the common bile duct is also opened on suspicions of finding stones in it. The sphincter of Oddi is also opened to keep it always open.

A slower progression diet should be followed in the case of simple cholecystectomy.

Therapeutic diets should be personal and depend on your medical condition and specific food culture.  The specification of food (specific menus) right for you may not be right for someone else and therefore the information we provide is generic.

Please note that this information is not intended to replace any treatment or to induce self-prescription.  Always ask your doctor or specialist who knows the status of your health best, and must prescribe the diet right for you.